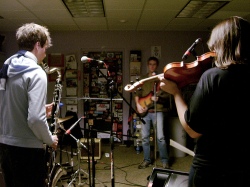 The music that Static Films plays could loosely be considered to reside in a kind of ‘indie’ scene, but that is not an adequate description of their genre, as they share more with John Coltrane than Conor Oberst. This is where the surprise arrives though – one expects a pop concert, a series of clichés, and instead is given a much more shocking sound-image. If music has been overtaken with a sense of non-communication, idle chatter, or redundant posturing, then the music of Static Films can provide a very good (and very modern) form of communication. By it’s very simplicity it frees perception to shock, and creates a kind of naked lunch of sound. But don’t take our word for it, tune in to Live Friday to hear for yourself.