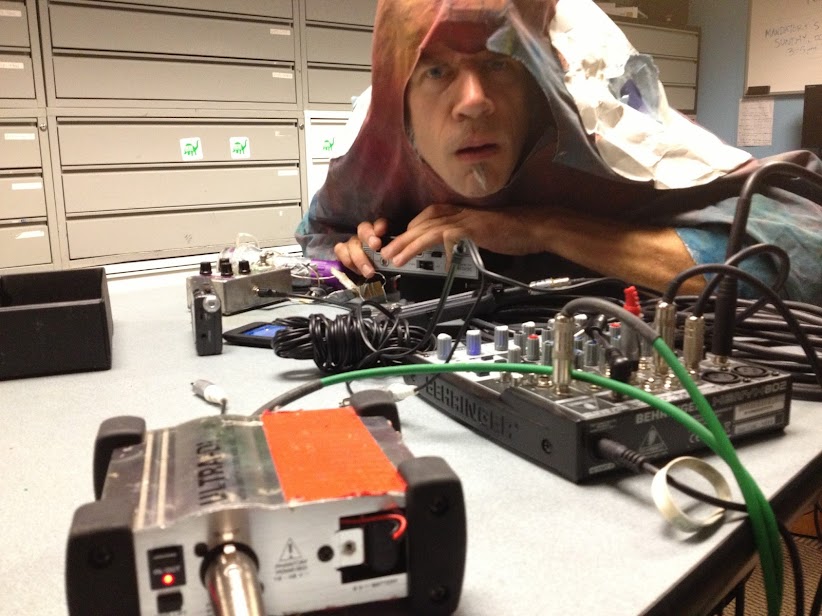 It’s always a lot of fun when any one of these artists manage to make their way onto the What’s This Called? airwaves, and usually Ricardo Wang is kind enough to throw me a bone, and bring me in when it’s time to run sound.  Each of these artists have not only managed to perform in the kpsu.org studios, but bring with them a reputation that not only precedes them, but demands that listeners drop everything and listen with rapt attention for the duration of their sets.  Furthermore, when you factor in the rabid What’s This Called? listening audience, and its a guarantee that any number of people worldwide are bumping any artist that appears on this show.

However, today’s show was a special treat.  Not only did we get three full sets of noisy goodness, but one included a three-way jam that was not only mesmerizing, but managed to bring the fuckin’ house down for anyone who managed to hear the event.  First, we had a full set by the legendary Crank Sturgeon, an artist that I’ve had the pleasure to see a number of times now, but who always manages to captivate and confound even the most hardened of listeners.  Next, we had a truncated set by Styrofoam Sanchez, a trio of incredible noise sculptures who pulled out all the stops with a Halloween-themed set that was not only mind melting, but almost terrifying.  We topped the show off with a two-for-one deal, beginning with a mini-set by the wall-of-sound stylings of Overdose The Katatonic, who’s weird and wonderful ear candy set the stage for an improvised jam with all three groups, blending into a fantastic cacophony that you can only hear on What’s This Called?

I was extremely pleased to be a part of this fantastic sampling of audio insanity, and it is one more reason why I’m thrilled to be a member of the What’s This Called? team.  But really, to experience, just follow the link above.  Your ears will thank you.

More audio madness is coming your way all throughout the month of October, so stay tuned!