I’ve Been to the Bemsha Mountaintop 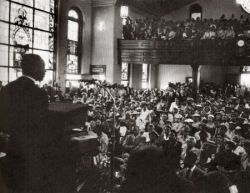 This Was The Last Speech He Gave Before His Assassination The Following Day.

I have always taken for granted the holiday that we take in January to honor Martin Luther King Jr.  It was not that I didn’t care, but that the day usually came when papers were due, or when I worked a job that already required me to work that day.  But in light of my new job, getting the day off – paid – felt a little weird.  I had to be honest with myself that I had never really listened to any of his speeches all the way through, and that I knew very little about the work he did other than the most general, basic sense.

So today’s radio blast is a bunch of stuff culled from my collection of audio that relates to MLK Jr.  I have an edited cut-up of his last speech, and a radio broadcast from just after his assassination, as a way of presenting some of what I discovered in actually doing some research of this amazing and incredible man.

I do not have any great epiphanies to share with you, and there is no great revelation at work in this show.  It seems very clear that, as he delivered this speech, he knew his days were numbered, but this seems to be the case in most of the time leading up to his assassination.  I think the arrangement in this little mini-cast works to reveal why he was considered to be one of the best orators of our day, but also to illuminate much of what his work was about in the most basic and general sense possible.

For those who stay to the end: there’s a little joke to ease the tension of such a serious subject.

I urge all of you to listen to his speechs, read up on this man, and let yourself actually understand the value of this holiday.  So much of what happens to us seems so passive, and we let days pass without reflecting on them too often.  This time, stop for a moment to consider who this man was, and what effect he had on the world around us.

And: let’s hope you MLK Day was full of the promise and wonder that every new days brings us.

I’ve Been to the Bemsha Mountaintop

One thought on “I’ve Been to the Bemsha Mountaintop”