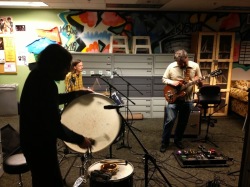 For this particular team up between Blasphuphmus Radio and Ricardo Wang, we bring you the hypnotic and meditative sounds of ALTO!  This three piece consisting of two drummers and a guitar player present composed and improvised musical pieces that can exceed 20 minutes, but run as concisely as an AM Rock Song.  Think of them as equal parts Glenn Branca and Stravinsky, with an ear for all things Sun City Girls.  This combination brings you a fantastic recording that you just have to hear to believe.

ALTO! were one of THE acts to see at NoFest a few weeks back, and this performance was in anticipation of their gig that same evening at Slim’s in Historic St. John’s.  If you were at that show: thank you!  You helped raise enough money to keep shows like What’s This Called? on the air.  You also got to see some incredible performances by a number of other artists, and both footage and recordings from that night are pending.  In the meantime, this document of their Radio Performance will give you an idea of how incredible these guys are.  There are three releases available on altoexclamationpoint.bandcamp.com, and if you get a chance to see them, pick up their LP.  It is incredible!

For this show, I was lucky enough to engineer the band, and aside from two small imperfections in the engineering, I think the sound is pretty great.  ALTO! is very much an ASMR trigger for me, and their performances was really incredible for me.  I was very lucky to get to be involved in such a cool show.