Swallows were kind enough to come and play on my show.

Being the first week of our Pledge Drive, I decided to call in some friends of mine for the Second Annual KPSU Pledge Band Extravaganza! That’s right, a quick pick-up band was formed from various people I know, and they offered to play cover songs live on the air, all of which are requested by live callers. Last year I only managed to get two people to show up, and this year, in doubling the number of people, I also managed to increae the money raised by ten-fold. As usual, hilarity ensued (it’s just hard to have more that four musicians in a room together without them getting a little excited), and we even managed to attrack a bit of a crowd, too, which really added to the atmosphere. This was, by far, the most hectic and unusual episode of my show to date… and in many ways, the most fun, too. Thanks to all the callers and pledgers! We all thank you for making us produce such wonderful and fun shows! 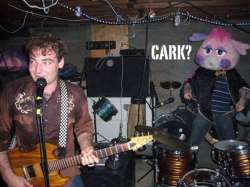 We’re From Another Carking Planet

We’re From Another Carking Planet

Cark is not a fish, nor are they broad-shouldered lasses from the south of France. United in the belief that the rock world can be a bit stuffy at times, Cark, like to keep the audience on their toes. A hyperactive songwriting process, that covers topics as diverse as picnics, & roboticly enhanced hobos taking over the planet, Cark fuels performances that invite the audience out of their seats to join Cark in their merrymaking.  No cow is too sacred for the seppuku two.